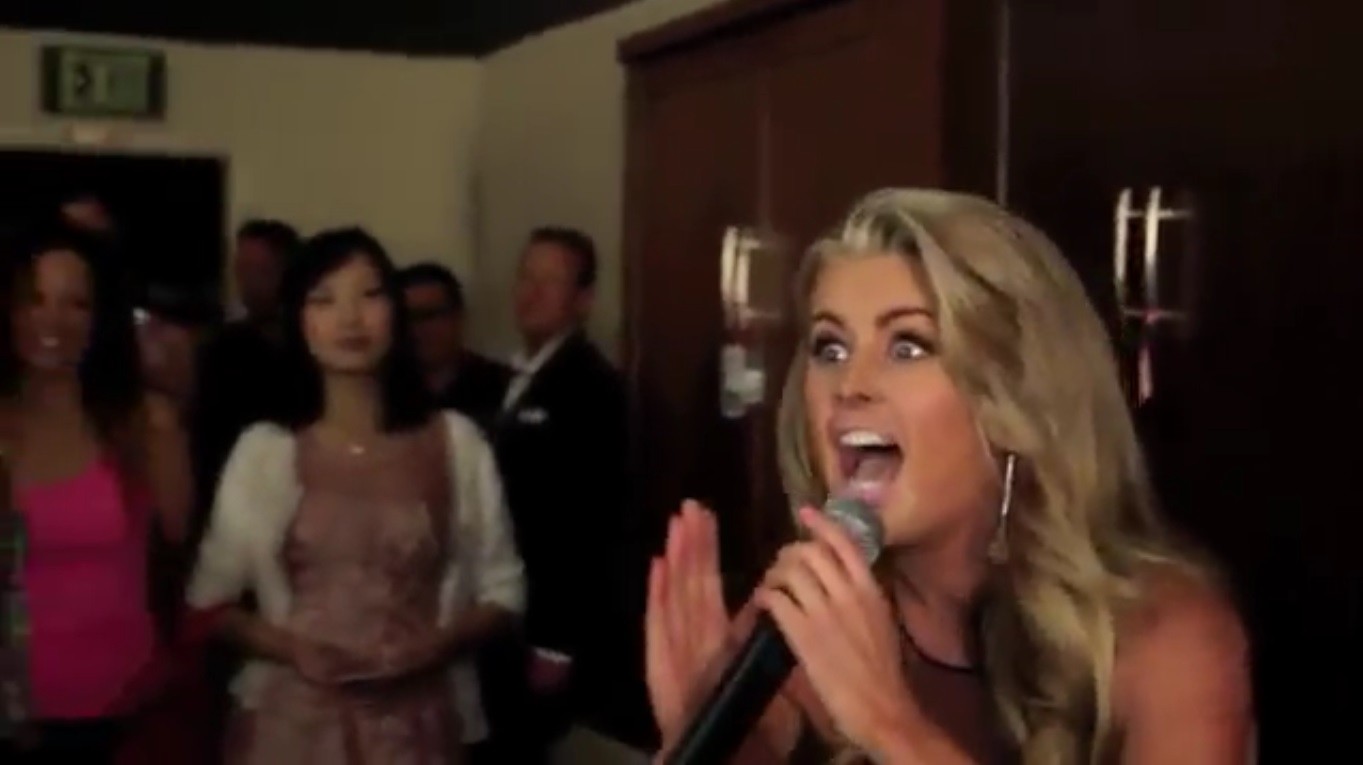 UPDATE, JUL 20, 11:40 A.M.: Jennifer Murphy is crying white woman tears after her song “I Want to be Neenja” is getting karate chopped online for its “ching chong” racism. The businesswoman took to her “Jennifer Murphy Beds” Facebook page this morning to whine about how unfair all the criticism has been. In her world, everyone is missing the empowering message of the song. “If you put your mind to it you can do anything… including becoming a Ninja,” Murphy wrote. “And also that good will prevail and that love can conquer all.” Maybe that all got lost in the very stereotypical broken English Asian accent Murphy used to sing the song!

The “Neenja” fallout is definitely being felt. As mentioned before, the anti-racist Yelp brigade has dragged Murphy’s bed business page down, but that’s not all. “I have lost many of my business deals that I have worked toward for years and am being dropped by clients that I have produced video campaigns for because they too are being attacked,” Murphy wrote. She also complains that national and local press have slandered her, giving special attention to our very own “Wannabe OC Bed Queen Sings Racist “Neenja” Song at Laguna Hills Launch Party” headline. Hey, we can’t help if we know how to write ’em!

Murphy wants the world to know that not only have people gotten her “Neenja” song all wrong, but have misjudged her, too. “For those people that were hurt by my song, please understand that it was taken out of context and misconstrued,” Murphy’s latest no-pology goes. “I promise it was not mean-spirited. I have a big heart and I’m a goof-ball.” She reveals that she planned on doing a music video for “I Want to be Neenja” with her Asian friend Peter, who happens to do a great impression of Chow from the Hangover trilogy. And Peter’s not her only Asian friend. The Asian woman in the Laguna Hills launch party performance video is also her friend, too.

“She is a very sweet young woman who likes me and likes my song. English is not her first language as she moved here from China only a few years ago,” Murphy explains. “The night of my party she didn’t understand much of what I was was singing, and her shy smile and somewhat perplexed expression has been falsely misrepresented by the media and bloggers all over.” Oh, so that’s it. No fragile lotus blossom stereotyping here of an Asian woman at all.

Well, if Murphy wants to be “Neenja” she’s going to need thicker skin. But for as bad as her latest missive is, it pales in comparison to Dennis Woodard, the song’s producer. He defended Murphy in our comment section by decrying “reverse racism” saying she was targeted for being a “pretty blonde white girl.” Woodard seems salty that the controversy will derail him from putting the finishing touches on the worst song to come out of OC since Rebecca Black’s “Friday” nightmare. He vows never to apologize, asking aloud on his Anaheim studio’s crappy website, “Since when is it ok to claim a YouTube personality a “Racist” because they write some creative and silly lyrics and sing with an Asian accent. Come people…”

Where’s one of those Jennifer Murphy wall beds when you need them to catapult them away?

ORIGINAL POST, JUL 18, 5:39 A.M.: Jennifer Murphy, former Miss Oregon beauty queen and The Apprentice candidate, isn’t recording a new album. But for whatever reason, the businesswoman performed a song at a Laguna Hills “pink carpet launch party” for her signature bed line in April anyway. A video uploaded on YouTube gave a “sneak peek” at “I Want to be Neenja.” It only got more bizarre and racist from there.

DJ Richard Wayne seems to have kept the party going at Wallbeds “N” More with mainstream hip-hop hits, but at one point Murphy took the mic. “I shut my Murphy bed,” she sang. “Sat down to scratch my head.” Murphy then blabbered on about a villain named “Chow” and how she needed to find a way to take him down, especially after Chow busted out a ninja move. The storytelling song took a turn for the racist next. “Maybe I, too, could be ninja,” Murphy said in what the Angry Asian Man Blog calls a “ching chong” voice.

The South County crowd lapped it all up, sharing chuckles at the song’s expense while filming with their phones. Not laughing? An Asian woman who stood to Murphy’s right with a face that quietly screamed “What the fuck!” inside. “I’m gonna chop, chop, chop Chow down / Take Chow down to Chinatown,” Murphy sang during the chorus, complete with animated karate chops going towards the woman’s direction.

For readers who won’t make it to the end of the song, Murphy finally takes down Chow with a ninja move while revving her stereotypical Asian accent up a few notches. After one final, dreadful chorus, “I Want to be Neenja” came to a close with applause. “You can do it!” yelled one man. Murphy slapped high-fives and took hugs while the DJ cued up “Kung Fu Fighting.”

Everything seemed cool for Murphy until Reddit readers recently plucked the video from the bowels of the interwebz. Ever since then, people have swung nunchucks at the song and its singer. Murphy pulled the video off of her YouTube channel and is quick to claim copyright wherever it rears it ugly head on the website. But Yelpers have descended upon the page for Jennifer Murphy Beds, loading it up with enough negative reviews to drag the company down to a two-star rating. “Came to downvote this business because of the racist video they made. What a joke. Very OC though,” wrote one reviewer from Santa Ana. Can’t argue with you there, bruh!

After “I Want to be Neenja,” Murphy wants to be sorry, giving an attempted apology Friday afternoon on Facebook and her company website. She mentions that “I Want to be Neenja” was meant to be “silly” and “self-deprecating” (wait, Murphy’s Asian?). Better yet, friends and strangers found the song funny, so how could she know it was racist? Like almost every apology of its kind before it, the businesswoman is sorry for how others took it instead of taking ownership of the song being racist. “It is obvious that I had bad judgment and didn’t understand that my attempt at humor would be seen as insensitive or mean-spirited, and I have removed the video from my channels,” Murphy wrote.

The only thing that could make this whole fiasco worse is the live audio from Murphy’s dreadful performance. Yikes! Where’s Chow when you need him?