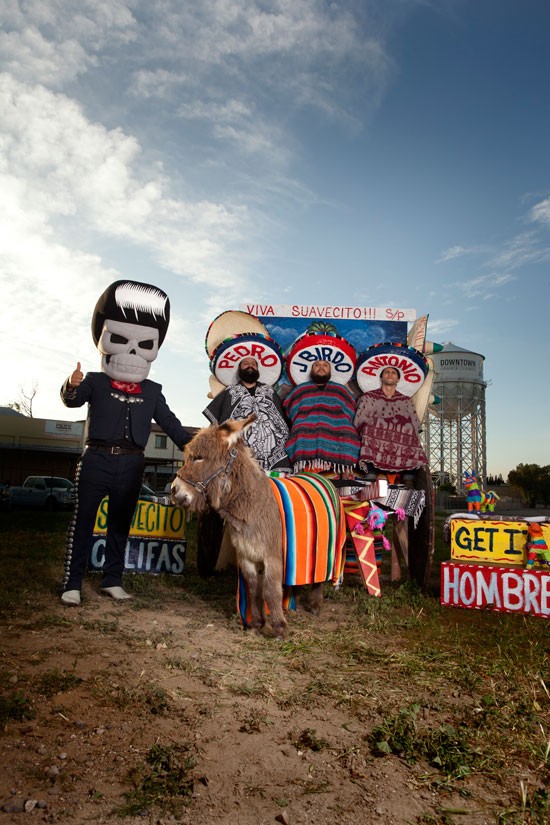 “No, no, no, no, man!” yells Tony Adame of Suavecito Pomade, barely containing his laughter. “Don't use that shot–ha, ha!”

Adame, his brother Pete, and their business partner J-Bird stand along with about six of their friends in an abandoned parking lot near the 5 freeway in Santa Ana, the city's iconic water tower looming in the distance. Everyone is howling as the photo shoot dissolves into camp. Not that the three are ever fancy paisas: For the past three hours, the Adame brothers and J-Bird have faithfully re-created the infamous Tijuana tourist trap you see above, complete with sombreros, ponchos, a custom-built stand they slapped together in minutes, and a pair of miniature donkeys named Jorge and Angelina Jolie they rented from a ranch in Malibu just for the shoot.

Also with them was Michael Moreno, wearing a splendid mariachi outfit and a gigantic, air-conditioned mask of Suavecito's logo: a skull with a pompadour that makes James Dean's hair look as flowing as a Bicced dome. Throughout the shoot, Moreno stood next to the donkeys, played with the donkeys, and generally looked as surreal as a guy wearing a charro costume and a huge calavera during rush-hour traffic might look.

But now, Moreno is jumping high in the air, arms and legs spread wide in joy–and that's just too much for Tony.

“It's funny,” Tony explains later. “But that's not really our style. Posing with donkeys and ponchos? That's who we are!”

It's this studied irreverence that has made Suavecito one of the best DIY success stories in recent OC memory. The company's logo is already as much a part of la naranja's visual landscape as Calvin-pissing-on-something decals or Harvest Crusade bumper stickers. Its signature product–a miraculous goop with a light scent, bright sheen and a hold as strong as steel–is shipped worldwide, with fan clubs in Amsterdam, Thailand, Japan and beyond.

Suavecito has branched out into clothing, shaving cream, women's beauty products, even a bobblehead–all mega-sellers shipped out from a SanTana warehouse by an ever-expanding staff, almost all friends and family. It's an amazing trajectory that has created all sorts of rumors about the Suavecito Señores–that they're actually gabachos, that they're rich fresas from Newport–because no one believes their tale.

“It's kind of cool for people to not really know our story,” Tony admits later, as the three eat lunch at Taquería El Zamorano, near Suavecito World Headquarters. “And it's cool to see how it comes back to us when people find out. 'You're the Suavecito guys?! My cousins know you guys!'” At 31, J-Bird is the oldest of the group, the company secretary yet also the biggest joker. Pete, CEO, is 29 and all about the Paul McCartney Let It Be-era beard and tats. The baby, at 26, is Tony, who's soft-spoken and clean-shaven but with a wry sense of humor and a maturity beyond his age that's perfect for serving as Suavecito CFO. All three grew up on the same street in the rough Santa Nita barrio in west Santa Ana. The hermanos Adame, sons of immigrants from Jalisco and Guanajuato, graduated from Los Amigos High; J-Bird is proud to say he was part of the first graduating class at Marie L. Hare Continuation High School in Garden Grove.

They were all on the right working-class career track around 2007: J-Bird was a cook at the Summit House in Fullerton after studying at the Art Institute of California, Orange County; Pete made tools as a machinist; and Tony majored in architecture at Orange Coast College. One of Pete's work mentors stressed to him the importance of making things on your own, which led to him developing his own pomade. His product of choice, Japan-based Cool Grease, was just too expensive, so he and J-Bird bought 5-gallon Home Depot buckets, began experimenting and gave away the results to friends.

“It was never a business,” Pete stresses. “We just got this gnarly kick out of it. We were just working stiffs.”

That changed in 2009, when the Great Recession led to Pete's layoff and a severance check that, he jokes, was a bit more than $1,000 after “Tío Sam was done with it.” He and J-Bird wanted to use the money to open a hot dog restaurant, but “we had no rich uncle or equity” to get a bank loan. By then, Suavecito (a friend's aunt coined the name, which translates as “Dapper Dan” in Chicano Spanish) was a Santa Ana underground sensation, with barbers collecting baggies and Tupperware containers of the stuff and selling it on the down-low to customers who demanded the near-mythical product.

“We figured we'd sell enough to make money to open a restaurant,” J-Bird says. But when the initial 4,000 cans sold out almost immediately, they figured “it was time to get serious.”

First, they had to track down Tony, who had just returned from a year of living in Europe and was about to start making burritos at Chipotle. When Tony met up with his brother and J-Bird, he found the entire company saved on a Dell computer missing the letter C and the number 9. (“That's why we could never sell Suavecito for $9.99,” Pete cracks.) The records-keeping system was so haphazard no one could remember who drew the Suavecito logo when they wanted to do a female version. (Turned out the artist was a friend of a friend who lived in San Bernardino.) More important, Tony found Suavecito had grown “exponentially” since he had last seen the two.

“J-Bird and Pete didn't see the growth, but it was night and day,” Tony says.

Suavecito had not only penetrated a Mexican hair market long-dominated by Three Flowers and Moco de Gorila, but it was also making inroads into the rockabilly scene. Since then, the company has not stopped growing, with its owners traveling to Japan to meet with fans and becoming regulars at Hootenanny and car shows across the Southwest, as well as at Santa Ana's annual Day of the Dead, where the Suavecito booth is frequently among the most popular vendors. The three make sure to work it every year because it's who they are. When asked what other Suavecito products or promos they seek to create, J-Bird responds, “Shit that we're into–stuff we liked when we were kids but could never afford.” That list now includes artist commissions, sponsoring fighters and a trophy truck team (“Jonathan Snelling and the Greenes of Greene Motorsports have given us a lot,” Tony says), a clothing line–and, again, never losing track of where they're from.

“A Suavecito can stays cheap,” Pete declares. “It makes people understand we don't want their money. You see people come in with their kids, who have a sad face, who can't afford a can–that's us right there. Our workers know: If you see kids like that, let them pay what they can.

“We went to this high school career day,” Pete continues, “and there were professionals trying to get a bunch of Mexican kids to listen. Here's this 65-year-old white guy talking about how they started their company. What kid is going to listen to that? For us, we gotta show them we're them. For J-Bird, he gets to say, 'I was sitting in your fuckin' chair. You can do what you want, and that's fine. But I can save you five years of wasting your time if you listen.'”