The fast food war is a rough life. No one thinks eating food from out of a window is a good thing to do anymore. The market for fast food isn't growing. So marketing fast food today is more about who's hip and who's cool than it is about the quality of the food. To grow, companies need to literally steal customers from each other.

The restaurants have sunk to taking direct pot shots at each other (Taco Bell v. McDonalds, anyone?) and even more or less directly ripping off menu items.

Need proof? Well, here are the first most egregious Big Mac rip offs to have ever existed, and they're all pretty new. 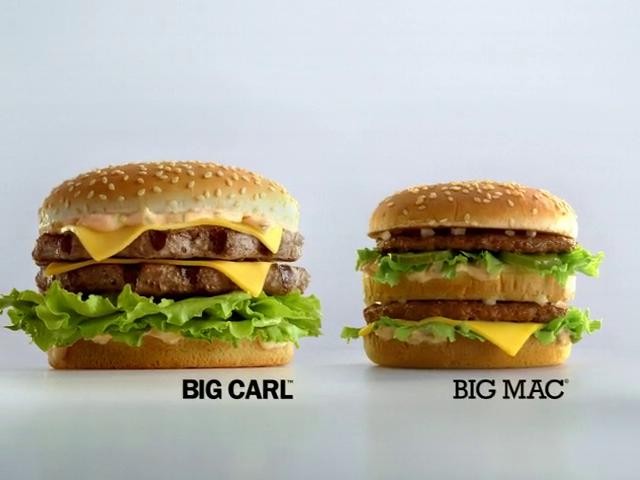 Carls Jr.'s shot at the Big Mac, the Big Carl was originally released in 1995 with a rerelease in 2009 and featured two beef patties, two pieces of cheese (compared to the Big Mac's one), lettuce, special sauce, and only two pieces of bread.

It also featured a sort-of tacky commercial that let go of any subtlety and directly compared it with the Big Mac. Sure, it's slightly cheaper and about 30 percent heavier, but when you're going up against the what is pretty much the best known signature burger in fast food history, you probably shouldn't remind your audience about it — especially if your burger isn't actually as good.

The Big Carl is a perfectly adequate fast food burger, but that's not saying much. Compared to the Big Mac, it's a pain to eat, messy, and a little monotonous (breads not a sin, you know?). Sure, starving college students might be attracted to the extra girth, but people who don't need to worry about how much money they're spending on fast food of all things? Meh. Another throw back from the nineties that found a resurgence late last year, the Big King might be the only burger on this list that actually sort-of-objectively tastes better than the Big Mac.

Why's that? Well, the Big King is a near carbon copy of the Big Mac, from the three piece bun to the single piece of cheese, but the biggest difference is a doozy. The Big King uses Burger King's “fire-grilled” beef patties, and when it comes down to “fire-grilled” vs. flat top, well, sometimes tasting the heat is better than tasting meat.
[
3. The Bonus Jack 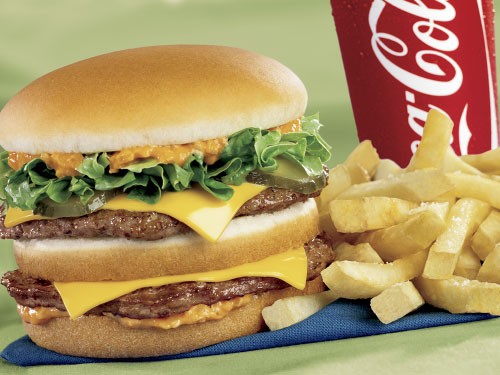 Some real history here: the Bonus Jack is the oldest burger to appear on this list so far, with a birthdate in 1970, still about three years younger than the Big Mac.

Like Burger King, Jack In the Box went with the look-exactly-like-our-competitor strategy, save for no sesame seeds and a second slice of cheese. I swear, by this point most of these burgers could be produced by the same company, frozen, and then shipped to save some money and no one would notice.

But hey, lack of visual differentiation aside, the Bonus Jack probably had the best commercial of the copy cats. Yes, that's a chicken sandwich. Yes, KFC made it. No, it probably doesn't taste good.

I wouldn't have even put it on this list if KFC hadn't put the word “Big” in the sandwich's name. Lucky for us it's only available in Canada, because there's no way this thing is good. They're taking dry carbed-up chicken that's fried to overdoneness and putting it between extra layers of carbs. There's no way anyone should have enough saliva to finish half of this thing, much less all of it.

Let's just move on and forget the Big Boss ever existed — like KFC will when they remove it from their menu in a few months. Alright, last one. The Big Boy is the signature burger of Big Boy restaurants, a once grand national chain founded in…1936 in Glendale.

Yup, that's right — 1936. By the time McDonald's introduced the Big Mac in 1967, Big Boy restaurants had been serving a burger with three pieces of bread, two beef patties, and one slice cheese for over 40 years all across the United States.

So what gives, why's McDonald's the top fast food brand in the world, and why's Big Boy relegated to five states and Japan? Well, I guess when it comes to fast food, stealing might not be such a bad thing after all.