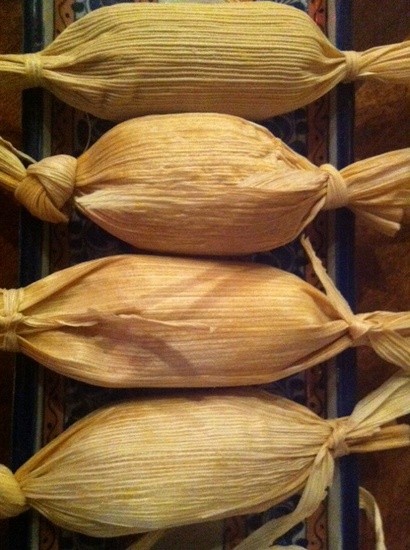 Fans of rap genius Tyler the Creator must've scratched their head in confusion when he released a music video this month for his equally head-scratching song “Tamale.” What exactly could a hip-hop head possibly know about this quintessential Latin American meal, and why would he craft a song based on it, even if it has little to do with the subject at hand?

But, in reality, Tyler was following in the grand tradition of a curious genre of American music: tamale songs. Since the early 1900s, when tamales sold by men or packed in a can first became popular across the United States (a topic I cover in-depth in my book), tunes praising the toothsome treat, the people who sell it, or beautiful ladies deemed “hot tamales” have been penned by Dixieland jazz groups, by hip-hop artists, by bluesmen, ragtimers, zydeco kings, alt-rock gods and more–but none, unfortunately, by the Flying Burrito Brothers. There are now songs devoted to tacos, to tequila, and many other Mexican foodstuffs, but no comida has more songs penned to it in American letters, a testament to the staying power of masa wrapped in a husk.

Most tamale tracks been lost to the ravages of time, but there's nevertheless enough to warrant this fabulous listicle. Tellingly, I've counted more songs praising tamales written in English than I do in Spanish, proving again that Americans love Mexican food even more than Mexicans–but there are a couple of great Spanish-language songs about tamales, too. Without further ado, música, maestro!

Charming song that's played on a loop on La Rockola 96.7, this Oscar Padilla composition isn't so much about tamales per se as the tamalero working the restaurant. The lyrics are straightforward, as Padilla takes on the persona of the tamalero by announcing everything he's selling–chocolates, cigarettes, calling cards, memorabilia for the Chivas and Club América soccer squads to God-knows-what-else in a passage that's breathless not just for the singer but also the accordion.

You wanna get old school? This song by legendary ragtime singer Arthur Collins was recorded in 1909–over a century ago! The music sheet for this song has an African-American on the cover, as they were the predominant tamale men everywhere in the United States except the Southwest during that time. Collins affects the intonations of a tamale man, although thankfully not as stereotypical as in some of his “coon” songs for which he remains notorious. How did African-Americans get to sell tamales in the first place? All in my book!

Me hicieron de chivo los tamales is a Mexican dicho (aphorism) that literally translates as “They made me goat tamales” but which means someone duped you–or, more often, someone cheated on you. This is one of the few times tamales are used in a negative sense in la canción mexicana, which only shows again how much gabachos truly appreciate Mexican food–they would never insult tamales like that!

“Red hot! That's what!” are the only lyrics needed for this Dixieland-era recording, most famously played by cornetist Freddie Keppard on this 1926 track. Tellingly, Keppard recorded it in Chicago, the city that introduced tamales to the United States back in the 1890s and also introduced the “Hot tamales! Get them while they're red hot!” refrain associated with the meal ever since. But the credit for labeling gals as hot tamales goes to…

Okay, so this song isn't about tamales to eat, but rather a “country girl” who's the hot tamale in question. But are you hearing that smoldering music? From the King of the Zydeco himself, Clifton Chenier. Calling gals hot tamales comes from the Deep South, which we'll get to in a bit…in the meanwhile, hear that accordion roar and shuffle your feet, ma cherie.

A song hailing tamales from Cuba? Absolutely. This cha-cha-cha standard by the legendary Orquesta Aragón hailed the Mexican tamales being sold in Havana before the Cuban Revolution–note the lyric about how the tamales “pican” (a Mexican Spanish term literally meaning “hits you with spice”). Song covered by every great tropical group since, featuring one of the most GANGSTA flutes of them all.

Chingo Bling is the most hilarious musical satirist this side of The Lonely Island, a Houston native who takes the city's awesome hip-hop and gives it a Mexican spin, usually involving food. The obvious choice here for this brilliant Chicano satirist would be “She Wants Chingo's Tamale,” in which a woman pine for Chingo's, well, tamale. But a much-better song is “Masa N Da Flour,” in which Chingo flips the narcocorrido on its head–instead of using coded language to sing the glories of drugs, he uses explicit drug lingo to sing the glories of tamales, hailing the tamaleros out there who toil from trunks to small restaurants to hustle their fortune. Great beats!

No-nonsense Delta blues in its infancy–1928, son. Red Hot Ole Mose recorded this one, about the curious phenomenon known as the Delta tamale (for those of you who haven't passed by the Deep South since the War to End the States, tamales there are different from Mexican tamales and prepared mostly by Italians and African-Americans. “White folks standing around here spending a-many dimes,” Ole Mose howled, “'Males so hot it burns my hand.” The more things change…

You can imagine my surprise as a 17-year-old Mexican delving into American music history as I discovered the recordings of Robert Johnson, ate up all of his genius…then came across his ode to tamales. How the hell, did my young mind think at the time, did a blues legend from the Delta know about tamales? The song of course, has been covered by everyone from the Red Hot Chili Peppers to Eric Clapton and even Cassandra Wilson, and it's no mystery: this is one of Johnson's few happy songs, boisterous even in its breezy, Django-y revel by the tamales he wants and the tamalera he needs.

But the best tamale song of them all is this 2011 novelty by relatively unknown Banda Costado playing a style of banda native only to Oaxaca–tuba with fiddle? You know it! The lyrics are a shout-out to all the different types of tamales popular in Los Angeles–sweet, red, green, Oaxacan, and the awesome torta de tamal (a tamale sandwich). Even better, though, is the video: an homage to the modern-day tamaleros, the line workers in the kitchen, and the feds who have been fruitlessly trying to shut them down since the days of Robert Johnson. ¡Que vivan los tamale men!