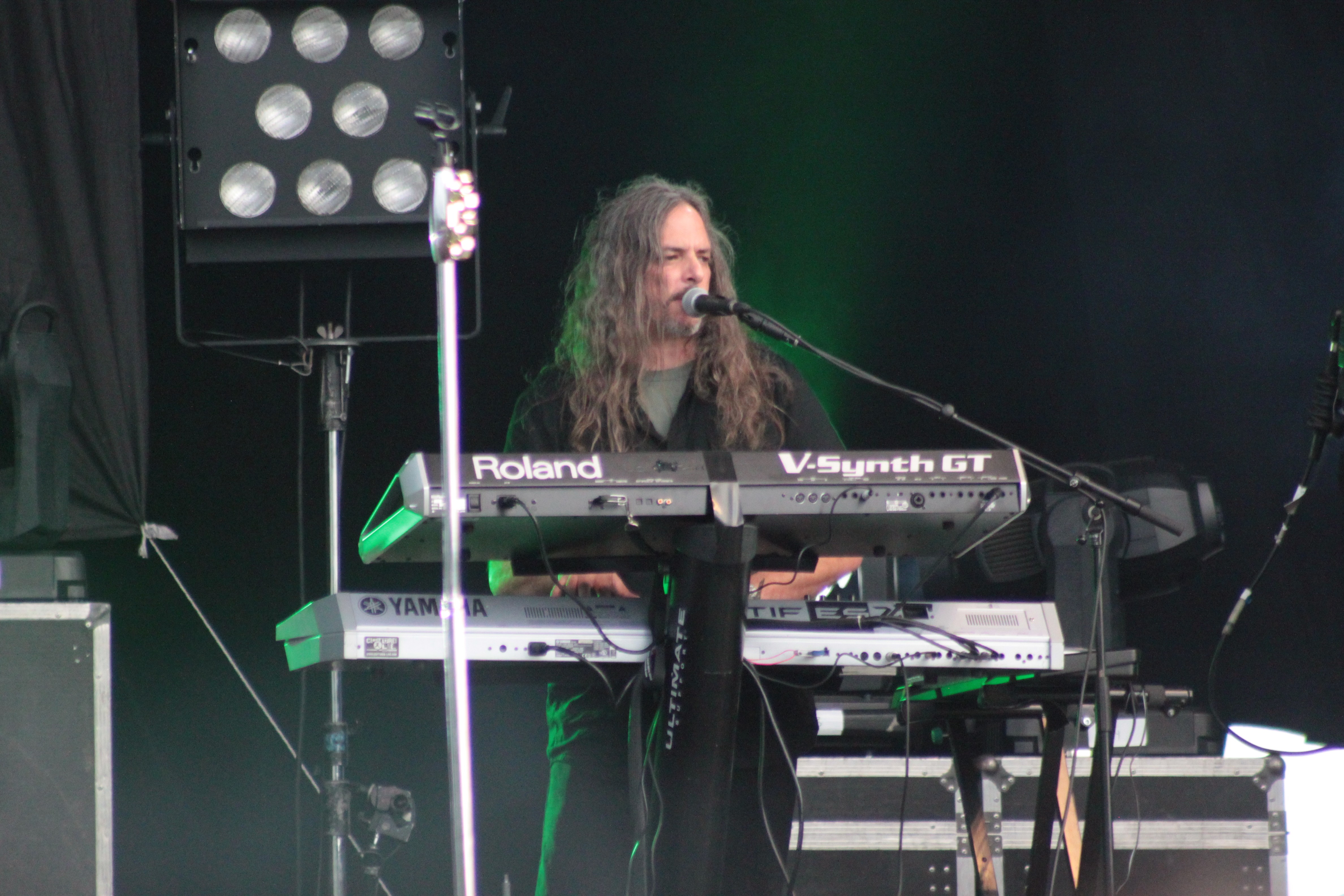 Guitar, bass, drums and a loud singer are all elements you’d normally connect with the sound of heavy metal music. While these instruments are the foundation for the genre’s penetrating sound, keyboards too, have also played a significant role in the music’s development and style.
While the piano/keyboards aren’t the first instrument that comes to mind when you think of heavy metal, there is no denying the power and melody that can be accomplished. With this in mind, we found that keyboards can play a pivotal role in heavy metal, in everything from power metal, hardcore, doom metal and even black metal and arena rock. We now present Metal’s 10 best Keyboardists.


10.Marta Peterson (Bleeding Through)
The addition of keyboards to this hometown band’s aggressive sound came just before they were performing as an unsigned act early in their career. The heaviness of the bass, the harsh and tortured vocals, and powerful, down tuned breakdowns all were given a more palatable context with a strong dose of Swedish melodic death metal, which leaked into Bleeding Through’s music. The beautiful Marta Peterson’s keyboard playing add a dense layer, which used hints of symphonic black metal, doom and even industrial patterns and loops. The majesty, duality, and beauty of the keyboards come out within each Bleeding Through tune, and this is especially true when it came to the band’s legendary intense live performances.

9.Michael Pinella (Symphony X)
This keyboardist has been a pivotal part of this American progressive power metal band since its inception in New Jersey in 1994. Trained in classical music, the keyboards accent the melodies and riffs of the guitars but also bring in their own epic musical textures. As the name suggests, the band’s brand of heavy metal is indeed symphonic in nature and decibel levels, and Pinella’s exceptional skills at the keyboard shine through on each of the band’s nine studio albums, including the classic staples among prog metal fans, 1997s The Divine Wings of Tragedy. His style is solid and based in precision and a wizard like command of the keyboard at all times. Aside form his contributions to Symphony X as a founding member, Pinella also released two solo albums, Enter the Twelfth Gate (2004) and Ascension (2014).

8.Jordan Rudess(Dream Theater)
As the keyboardist for prog metal titans Dream Theater for the past 16 years, Jordan Rudess was also part of the prog metal group Liquid Tension Experiment, along with ex-Dream Theater drummer Mike Portnoy. He is a fast and intense keyboard player, and uses technology to his advantage, for example he manages to electronically wire multiple samples and sounds from various keyboards to one single board. His innovative sound and exuberant onstage energy make him a perfect keyboard player for these big name prog metal rockers.

7.Josh Silver (Type O Negative)
Josh Silver was the keyboard player Type O Negative, from the band’s origin in 1989 in New York City, to the band’s demise after the death of frontman Peter Steele in 2010. As the band’s keyboardist, he also handled samples, synths and various macabre sounds and effects that gave Type O Negative it’s haunting, eerie vibe and sound that defined an era of gothic doom metal. Peter Steele’s vampiric deep voice were often at the center of the band’s bass heavy thunderous, intoxicating sound, but Silver’s signature and subtle yet rippling style of playing was always at in the background yet at the forefront of Type O Negative’s distinguished spooky sound. Silver’s creative, and creepily orchestrated keyboard playing was what gave Type O Negative an added crunch to what was already layers upon layers of morbid music. Silver was also in the band Fallout in the days prior to Type O Negative, a band that itself predated the apocalyptic thrash cult band Carnivore fronted by Steele.

6.Derek Sherinian (Alice cooper, Dream Theater, Yngwie Malmsteen, KISS, Billy Idol,and others)
Derek Sherinian was born in 1966 in Laguna Beach, and studied music in Boston. From a young age he began playing the piano and by the by the time he was in his early 20s he was a well established and exciting new keyboard player, often hailed as playing the instrument in the style of a guitar. He played keyboards for the prog metal band Dream Theater between the years 1995 and 1999, and also played on two Alice Cooper albums, 1994s The Last Temptation, and Classicks the following year. Sherinian’s credits also include KISS’s 1993 album, Alive III, and two albums from guitar virtuoso, Yngwie Malmsteen, Attack!! (2002), and Perpetual Flame (2008). As if this weren’t’ enough, the master of keyboards also has a well, established solo career; since 1999 he has released seven esoteric and mystifying solo albums, and has also performed and recorded with such other artists as Billy Idol, Black Label Society and Black Country Communion.

5.Ihsahn (Emperor)
Although he is a multi-instrumentalist, the keyboard playing skills of Ihsahn from the mighty Emperor should not be overlooked. The ravenous, dark, and ancient sound that Emperor created, remains, for the most part unmatched in its primeval force and dark, spiritual approach. Ihsahn’s true talent was using sounds, synthesizers and classical arrangements to compose raw, nature based, symphonic black metal that still gives listeners chills. The keyboard is underlying the caustic nature of the music, and listeners sometimes overlook these layers of dreamy buzzing black metal madness. Aside from Emperor, Ihsahn also has also released five studio albums of his own dark, experimental music, with a new album due in March, 2016, entitled, Arktis.

4.Janne Wirman (Children of Bodom)
Since 1997, Janne Wirman has been the keyboard player for this popular metal band from Finland. Led by frontman Alexi Laiho, the band’s sound fuses melodic death metal, prog, power metal, black metal and even thrash into a living, breathing machine that has spewed out ten studio albums, and created a rabid fan base of fans all across the world. The rapid, sharp precision of Wirman’s keyboard playing can be seen and heard in his live delivery where, again the keyboard is treated like a guitar. The influences of jazz and neoneoclassical music come to life with the symphonic and voluminous patterns and sound structures that Wirman exudes with his instrument often evoking the signature wailing and echoing of a guitar solo.

3. Mustis (Dimmu Borgir)
This black metal piano player was behind the keyboards for the popular Norwegian band Dimmu Borgir, between the years of 1998 and 2009. His skillful mastery of his instrument with the popular symphonic black metal band can be heard on albums such as Spiritual Black Dimensions
(1999), Puritanical Euphoric Misanthropy (2001), and Death Cult Armageddon (2003), and the band’s later albums. Mustis added the perfect atmospheric, and ambient vibe to Dimmu Borgir’s deathly image and stage presence. His keyboards were centered and full of riveting nuances and harmonies that made the darkness reek full havoc on the listeners senses.


2.Jon Oliva (Savatage)
As a co-founder of the early heavy metal band Savatage, Jon Oliva and his late brother Criss brought out classic metal/hard rock in the vein of bands like AC/DC, Van Halen, Iron Maiden and Judas Priest. Jon was a multi-instrumentalist, song writer and lyricist, and the Florida-based band was a hit in the mid to late ’80s and a staple on the touring circuit, performing with greats like Metallica, KISS and even Motorhead. Oliva’s talent was heard in the operatic and classically orchestrated music, and the musicianship was at top notch levels, with Oliva’s mesmerizing keyboard playing a highlight of the band’s sound, along with the dazzling guitar solos. In the late ’80s and early ’90s, the band’s sound took on a more commercial rock approach, but then tragedy struck in 1993, when guitarist Criss (the younger of the two Oliva brothers) was killed in a drunk driving accident. Jon Oliva kept the band alive, and to this day performs with Savatage, who have a career of now o a dozen studio albums.

1.Jens Johansson (Stratovarius)
World renowned and recognized as a talented power metal keyboardist, Jens Johansson currently plays with the Finnish power metal band Stratovarius but his resume as a keyboard player stretches a mile long. He is known for his tight, fast and precise style of neoclassical influenced symphonic heavy metal. He has played as the keyboard player for Yngwie Malmsteen in the ’80s, and also performed on the 1990 Dio album, Lock Up the Wolves. Johansson has also performed and recorded with the bands Hammerfall, Kamelot, and Sonata Arctica, among many others, but has been with Stratovarius since 1995.