This is how you lose faith in law enforcement.

On March 26, a #MAGAMarch at Bolsa Chica State Beach made worldwide headlines because it descended into chaos. The initial story reported by media outlets was that violent antifa assaulted innocent Trump supporters with pepper spray; the truth, of course, was that those antifa used pepper spray only to protect themselves—and, more importantly to me, to protect OC Weekly reporters who were getting assaulted while doing their jobs. Our reporting was vindicated when the Orange County District Attorney’s office dropped charges against four of the five antifa arrested—but I digress.

Three days later after the melee, I left an angry phone message with Kevin Pearsall, public safety superintendent for the Orange Coast District of California State Parks police. The previous day, he had told the Orange County Register that “no one had called his department or requested further investigation” about any assaults, which told me that he wasn’t about to do his job and help us find the real perps. See, the assault on Weekly intern Frank John Tristan, and photographers Brian Feinzimer and Julie Leopo, happened within eyesight of Pearsall’s officers, who stood by and did nothing. An officer also did nothing when Leopo complained on the spot about what had happened. I assumed that Pearsall—who full well knew that our team got assaulted, because that was also reported nationwide—would at least give me a courtesy call…but nothing.

So I called the number I had for him. A woman said he wasn’t in that day, and transferred me to his voice mail, where I proceeded to unload on him. I didn’t cuss, but I did ask when would he call me back so we could discuss the assault that happened against Weeklings, and what he was doing to capture the two pendejos who beat up Frank and pushed Brian and Julie. I left my name and phone number, figuring Pearsall would at least fulfill his civic courtesy as a spokesperson for a government agency and return a call from the press.

Maybe he didn’t take calls. So on April 1, I sent him an email and attached the below Wanted poster, which we had run in our paper that week asking for any leads. “How’s the investigation going?” I wrote in my email. “In case you don’t know how they look, we made this poster that we put in our paper. We can also send you video of these guys. Please let me know what your department is doing to catch them—gracias!”

Maybe he didn’t do emails. I called one more time and left a voice mail on the California State Park Police Huntington Beach station’s general message box—can’t remember when, but I was far nicer this time. And when I got no response, myself, Julie and Brian went to the State Park Police station in HB on April 7 to lodge a formal complaint against Pearsall.

The young cadet at the desk said Pearsall wasn’t in and went on to get Officer Timothy Senneff. When I asked for a police complaint form, he said that there weren’t any available. I know this little game—all local and state police agencies in California are required to give complaint forms to the public upon request—so I told him that we weren’t going to leave until we we were handed some. After hemming and hawing and making a phone call, Senneff told the cadet to print out some complaint forms—voila!

Senneff wanted to know the nature of my complaint. And I told him: Pearsall had not returned my calls or emails, and I found that to be a dereliction of duty as a public safety officer and thus wanted him disciplined. Senneff apologized that we had any issue, and we had a good chat afterward. He explained to me that the State Parks Police had next-to-no resources to do investigations, and suggested we do our own research in capturing the assailants. If we had names, we could then forward them to the State Parks Police and go from there. I can’t remember when I mailed in my complaint, which I had to handwrite, but I got an email back in early June from Kent Miller, a superintendent for the Ocotillo Wells District in San Diego County. He was in charge of investigating my allegations against Pearsall, and wanted to interview me in person. We met June 14 at the Muth Interpretive Center at the Upper Newport Bay Nature Preserve. For an hour, I told him my story, which he recorded on tape as he typed out notes. The most incendiary thing I said was that I didn’t have any faith that there’d be any official action against Pearsall, but that I at least wanted it on his record that someone had lodged a complaint against him.

Miller seemed sympathetic. He said both protesting sides were out of line, and thought it not good that Pearsall hadn’t so much as acknowledged my attempts to reach out to him. When I told him that a female antifa who had been arrested had slapped a white supremacist only after he called her a “bitch,” he winced and said that sounded like incitement to him. When I told him that we knew the identities of the assailants, he suggested (if I remember correctly) that we could do a citizen’s arrest of the idiots but little else. I do remember having a copy of the picture that leads this article, but I didn’t give it to Miller because he didn’t seem too interested in going after him.

We left with a handshake. But that was all show. On August 28, I received a letter from California State Parks District Superintendent Todd Lewis saying Pearsall had done nothing wrong. “The evidence discovered during the investigation does not support sustaining the allegation,” Lewis wrote. “In addition, there is no policy of this Department, nor any statute in law that requires a member of this Department to speak to the media.” 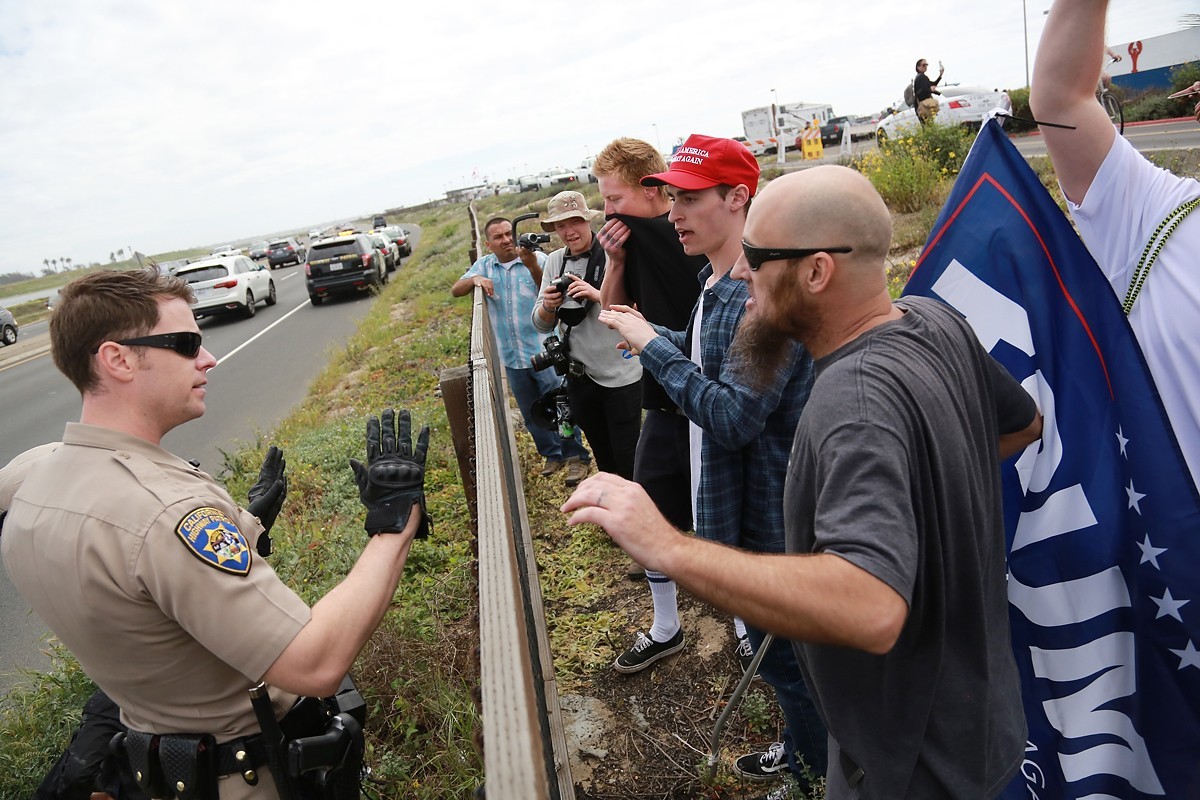 To recap: three reporters were assaulted at a California State Park while doing their jobs. The captain in charge that day found nothing wrong with this, never investigated the matter, never reached out to the publication whose contributors were threatened and hit under his officers’ watch, and didn’t return calls or an email from the editor of the publication demanding to know what, if anything, he was doing to investigate an assault against a free press. And his bosses found absolutely nothing wrong with any of this.

Lewis ended his letter by stating “it is clearly our objective to maintain good relationships with all members of the professional media and to provide timely information when requested,” but that’s a laugher. So media organizations, beware: if you send your reporters to any California State Park, the police agency in charge won’t give a shit about the safety of your employees. Quis custodiet ipsos custodes? Absolutely no one in this Trumpian age.