Three years ago, fans and members of a Las Vegas ska band posted comments on social media ridiculing a Long Beach man for his beliefs and homosexuality. Now, the band says they regret their past actions and are holding a show benefiting gay pride groups, but their victim isn’t letting them go quietly.

Andy George, the owner of Toxic Toast Records in Long Beach, posted on Be Like Max’s Facebook page in July 2014, asking the band to stop referring to women as bitches and sluts in lyrics, as he heard at one of the band’s shows.

According to screenshots of the post, Be Like Max replied, “Fuck you, slut,” and singer Charley Fine created and posted a meme with George’s photo with the words, “Excuse me bitch, can I help you?”

From there, fans added to the thread and posted comments like, “I think this kid is just mad cause he’s gay” and made memes of George in regard to George’s homosexuality. 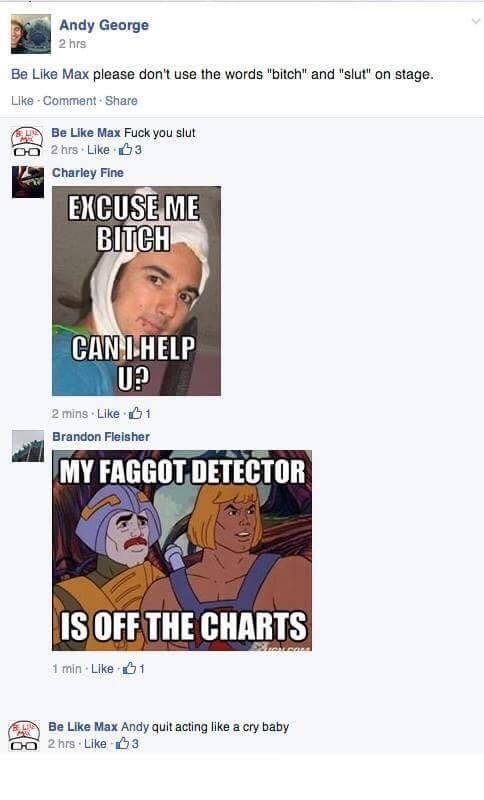 While neither Fine nor his band directly used homophobic slurs, according to screenshots from the Facebook thread, George said he was still offended by their choice of words.

“[Charley] was the first to call me a ‘slut bitch,’ which is still homophobic shit to say to a gay male,” George said. “Calling a gay male a bitch is an emasculating thing to do. I mean, think about what’s being implied when someone tells a man to ‘quit being a bitch.'”

George further went on to say that because the band or Fine did not censor or delete the comments making fun of him, that showed they “stood behind the statement.”

Bands and promoters — including Overeasy booking, which books big-name bands like MXPX and Screeching Weasel and was handling that Be Like Max tour — disregarded George’s concerns and blamed him for how the situation escalated, George said. He believed this showed how easily victims of harassment are silenced.

“It’s making my strong thought of ‘it’s not about me’ even stronger,” he said. “It goes so much deeper than just the band. Other bands and promoters defended them and protected them from any repercussions. In the end, it made me scared for all women and LGBT individuals in the scene because I realized any victims will face the same treatment and same defense of their attackers by the scene. It scared the crap out of me.”

Fine, in a statement sent to the Weekly, said he thought George was joking in the post at first and responded as such. “It quickly became apparent that he was not joking and instead of acting like a mature adult, I took the low road and bullied him,” Fine said. “It got to a point where friends of mine used homophobic language knowing this gentleman was gay, and I did nothing to stop it. Things got out of hand and a few days later, I attempted to apologize directly to this man, though in my juvenile way of thinking I did more to shirk responsibility in the apology than to actually own up to my actions.”

In a Facebook message, George told Fine his intentions were to “speak up and try to influence positive changes” but the two were not able to agree on a time for a full conversation regarding the issue. According to screenshots from the conversation, follow-up messages from Fine to George sent in July 2014, January 2016 and November 2017 went unanswered. “Honestly, with the number of non-apologies I have gotten from them, I have no desire to talk to Charley or anyone from the band,” George said. “Yeah, it makes me look like a bad guy to not forgive them when they are reaching out, but they faced nothing negative at all. … It’s a lot fairer to me to forgive them after people see what they actually did and how many non-apologies they gave.”

As of press time, neither Fine or George have come to a resolution over the controversy.

Be Like Max is slated to play a Ska Against Homophobia concert in Las Vegas on Jan. 11. The group will also play in Fullerton at The Slidebar Rock ‘N’ Roll Kitchen on Jan. 16.

George considered the timing of the benefit concert to be questionable.

Shortly before the show announcements, George said he posted about the 2014 events in a Facebook group for punk music. The group’s members, he said, include dedicated fans in the punk and ska scenes, as well as promoters and bands.

George’s post began receiving comments from people who tagged others “not to book this band” and warned fans of Be Like Max’s actions.

When George found out about the benefit show, he said it upset him because his situation with Be Like Max never had any resolution.

George and others have since posted comments on Be Like Max’s Facebook and the benefit event page, letting people know about the 2014 events. George said the comments are being censored and removed.

Fine made further unsuccessful attempts to reach George and discuss the situation in November after the show was announced, screenshots show. He said he wanted to put on the Ska Against Homophobia show as a way to “grow and learn” from his mistakes. “I’ve realized that, while I’ve never been homophobic, what I was a part of was homophobic behavior and I’m beyond ashamed that it happened and I want to do everything in my power to help people,” Fine said in his statement. “I’ve spent four years reflecting on this and how I can be a better person going forward, including reaching out to friends in the local LGBTQ community for guidance.”

Fine said he accepts he will never be forgiven by George but hopes others can learn from his mistakes.

“Words do hurt,” he said. “I believe in fighting hate with love and sincerely hope that the gentleman I hurt is able to get closure. I hope he realizes that I am truly sorry about initiating the bullying against him. And to the community I’ve disrespected and the people, in general, I’ve embarrassed and let down, I’m sorry.”