Now that 2015 is coming to a close, there’s one thing left to do: party like cuh-razy. With a million midnight countdowns, firework shows, and dance parties about to consume December 31st, we’ve compiled a list of the best NYE celebrations to attend in both Orange County and Long Beach. Whether you’re a music junkie who wants to see a good show or a party animal with a high tolerance for bass and drums, there’s an event to satisfy just about everyone this Thursday.

Say hello to 2016 with Soulection, a Los Angeles-based record label, radio show, and music collective known for its remixes of rap and soul music. Soulection founders Joe Kay and Andre Power will be there, along with artists Abjo, The Whooligans, Sasha Marie, Orijanus, Kronika, Andres, Eden Hagos, Jared Jackson, and  The Internet. Soulection, which started out as a local podcast produced in Kay’s grandma’s house in South El Monte and a Santa Ana venue, has quickly gained a massive following. 503 South Harbor Boulevard, Santa Ana; observatory.com

For some, life is better in feather-embellished headbands, silk shawls, and flashy neckties. If this sounds like you, stop by Aqua Lounge in Newport Beach for its Roaring Twenties-themed NYE party. Indulge in an appetizer buffet, craft cocktails, and the chance to call everyone “Old Sport” without raising eyebrows. Aqua Lounge, 690 Newport Center Drive, Newport Beach, CA 92660; aqualoungenb.com Swing, rockability, and hulability fiends: if your idea of ringing in the New Year requires your favorite music in the background, stop by Don the Beachcomber’s NYE Rockin’ Luau Party.  James Intveld, Big Sandy & His Fly-Rite Boys and The Hula Girls will be playing in three  different rooms, and guests can roam (and dance) around each freely. Of course, no luau party can be without a buffet (did anyone say kuhlua pulled pork?) and a coconut bar—so definitely expect that. 16278 Pacific Coast Hwy, Huntington Beach; donthebeachcomber.com Fans of hard music, trance, and err, anything involving heavy drums and bass will love Fresh NYE at Seaport Marina Hotel. Hard artists Mad Dog, Audiofreq, and Lady Faith are headlining the event among others; trance fans will get a kick out of Johnaskew, Driftmoon, and Magnus. The party will take place in two rooms at the hotel. Get ready to untz untz untz away! 6400 E. Pacific Highway, Long Beach; gofreshyourself.com 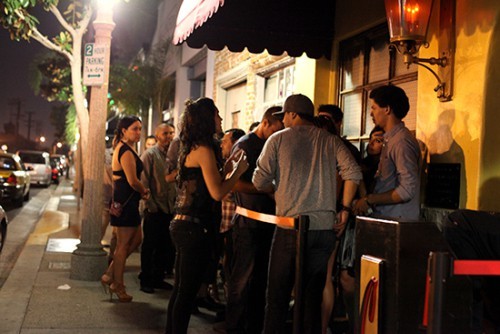 For an alcohol-free celebration with the entire family, hit up downtown Fullerton for its annual First Night NYE festival. Carnival games and food stands will line Harbor Boulevard and Wilshire Avenue and, by midnight, a fireworks show will light up the sky. If NYE without alcohol doesn’t seem right to you, hop around the nearby bars. E. Wilshire Avenue, Fullerton, (714) 738-6545; cityoffullerton.com OC Midnight Kiss is your traditional NYE party, complete with top 40 and house music playing on the dance floor. The party, which is located at the Avenue of the Arts Hotel, will take place in three different rooms. An open bar, champagne toast, complimentary party favors will accompany your midnight countdown. 3350 Avenue of the Arts, Costa Mesa; event page On NYE, the Queen Mary will transform seven ports into different destinations: New Orleans, Moscow, Beijing, Tokyo, Hollywood, Havana, and Lahaina. Each port will have its own DJ and food and performances based on the port theme. The Hollywood portion of the ship, for instance, features the Hedgehog Swing Band and a “Glitz and Glamour” bar. 1126 Queens Hwy, Long Beach; queenmary.com If by 11:59 p.m. on December 31st you want to be dancing to trap and G-house among a laser light show and LED screens, then swing by Havoc NYE at Yost  Theater. The party, which starts at 8:30 p.m., features artists Destructo, Sweater Beats, Milo & Otis, Gladiator, Aryay, Vindata, Kicks N Licks, and DJs from Modern Disco Ambassadors and Focus. 307 N Spurgeon St, Santa Ana; yosttheater.com